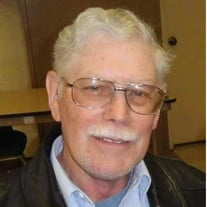 William “Bill” Alexander Rousseau, Jr., age 75, of Burt, passed away after a lengthy illness on Sunday, January 24, 2021, at Covenant HealthCare in Saginaw. The son of Thelma (Gaudreau) and William Alexander Rousseau, William was born on April 3, 1945, in Saginaw, MI. Bill grew up in South Saginaw and graduated from Saginaw High School in 1963. He married Suzanne Arnst on July 15, 1967. They shared 32 years of marriage together. Suzanne preceded Bill in death on October 12, 1999. Bill served his country in the United States Army. He was drafted in 1968 and served in Korea. Bill fulfilled his apprenticeship with Helfrecht Machine Company, then went on to work as a tool maker for General Motors and Delphi until his retirement in 2003. Bill was a proud member of UAW 467 and the VFW of Birch Run. He was a dedicated father and grandfather, involving himself with Cub Scouts, coaching youth sports, and the Taymouth Township Planning Committee. Bill will be dearly missed by his loving family. Bill is survived by his beloved children, Cynthia (Doug) Cherry, Michael (Trisha) Rousseau, William A. (Amanda) Rousseau, III, and Joseph L. Rousseau; adored grandchildren, Kyle and Nolan Cherry, Troutman Rousseau, Kayla, Brook, Abigail, and William A. Rousseau, IV, Joseph and Isaac Rousseau; great-grandson, Jackson Burton; dear siblings, Robert (Sally) Rousseau and Michelle Dubrulle; Uncle, Henry (Eva) Gaudreau; many special nieces, nephews, and cousins. He was preceded in death by his wife, Suzanne; his parents; and his brother, Thomas Rousseau. Visitation will take place on Wednesday, January 27, 2021, from 10:00 a.m. until time of Funeral Mass at 11:00 a.m. at St. Anthony of Padua Catholic Church Site of St. Francis of Assisi Parish, 3680 S. Washington Road, Saginaw, MI 48601. Rev. Fr. Gerry Pehler will officiate. In accordance with current state mandated restrictions, safe distancing and limitations on number gathered within the building will be observed. Attendees are also kindly asked to wear a mask or other facial covering, per state requirements. Burial with military honors will take place at Mt. Olivet Catholic Cemetery, Saginaw. A special thank you to Sandra Nanney for her care during the last few years of his illness. Memorials in Bill’s name may be made to the Birch Run Athletic Association, 12450 Church Street, Birch Run, MI 48415, in honor of his children’s and grandchildren’s athletics. For information, please call Fischer Family Funeral Services at (989) 755-8277. To express your condolences, please visit www.fischerfuneral.com.

The family of William "Bill" Alexander Rousseau, Jr. created this Life Tributes page to make it easy to share your memories.