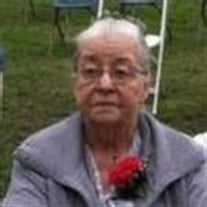 Pavlo, Shirley MaeSaginaw, MichiganPassed away Friday, February 13, 2015 at Healthsource of Saginaw at age 79 years. Shirley Mae Temple was born December 4, 1935 to the late Alexander and Ruth Temple in Saginaw. She married Andrew Pavlo on January 29, 1955, he predeceased her on August 30, 2000. Shirley enjoyed playing bingo, knitting and crafting with beads, as well as, reading. Surviving are her children; Dinah and Ken Hunt, Jim and Pam Pavlo, Charlotte and Wayne Muringer, Richard and Cherlyn Pavlo, Patrick Pavlo, Yvonne and Tim Stahl, Alice Callender, Kathy and Steve Wojtowicz. Also surviving are 14 grandchildren, 8 great grandchildren, two sisters Gloria and Joe Neuenfeldt, Lillian and Emil Kaleyta and a brother Thomas and Pat Temple. She was predeceased by two sisters; Molly Knoll and Rose Henderson and a brother Ted Temple. Shirley’s family wishes to extend a special thank you to the GLCI nursing staff and to Healthsource of Saginaw. Funeral service will be held on Wednesday, February 18, 2015 at 11am at the McIntyre Funeral Chapel, 504 N. Michigan Ave. Visitation will take place on Tuesday, February 17, 2015 from 4-8pm and on Wednesday from 10 am until time of service. Burial will follow in St. Andrew Cemetery. In lieu of flowers, please consider a donation to American Diabetes Association or the Alzheimer’s Association.

The family of Shirley M. Pavlo created this Life Tributes page to make it easy to share your memories.

Send flowers to the Pavlo family.