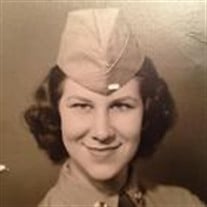 Evans, Rosemary E.Saginaw ,MichiganRosemary passed away August 1, 2014, in Saginaw, Michigan. She was born in 1930 to James and Eleanor Foley in Saginaw. After graduating from St. Andrew’s High School, she entered the Women’s Army Corps and served as a medic in Japan during the Korean War. She later graduated from Eastern Michigan University with a bachelor’s degree in education, and worked for many years as a teacher in Michigan, Kansas and Wisconsin. She was an active member of St. Dominic Savio traditional Roman Catholic Church. Rosemary was preceded in death by her parents and brothers Timothy, Thomas, James, Gerard and Albert Foley. She is survived by her children, Dana (Douglas) Owens of Prescott, Arizona, Denis (Monique) Evans of Phoenix, Arizona and Deanna (Paul) Steele of Midland, Michigan; siblings Michael Foley of Saginaw, Howard (Sue) Foley of Gladwin, Kate Allington of Saginaw, Cecilia (Thomas) Beckrow of Hemlock, Joan Foley, O.P. of Saginaw, and Kelly (Lee) Barker of Oscoda. She had 12 grandchildren and two great-grandchildren. Visitation will be held at the McIntyre Funeral Chapel, 504 N. Michigan Ave., on Tuesday, August 5, 2014 from 4-8pm with the Rosary at 6:30 p.m. Funeral Mass will be held on Wednesday, August 6, 2014 at St. Dominic Savio Traditional Roman Catholic Church, 7095 Kochville Rd., Saginaw, at 10:00 a.m. with visiting from 9am until time of service. Fr. Daniel Ahern will officiate with burial in Mt. Olivet Cemetery. In lieu of flowers, donations may be made to St. Dominic Savio flower fund.

Evans, Rosemary E.Saginaw ,MichiganRosemary passed away August 1, 2014, in Saginaw, Michigan. She was born in 1930 to James and Eleanor Foley in Saginaw. After graduating from St. Andrew&#8217;s High School, she entered the Women&#8217;s Army... View Obituary & Service Information

The family of Rosemary E. Evans created this Life Tributes page to make it easy to share your memories.

Send flowers to the Evans family.