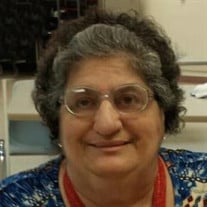 Rose M. Robinson, age 73, of Essexville, formerly of Saginaw, passed away peacefully, on January 27, 2017, at McLaren Bay Region. Rose Mary Ciaramitaro was born on November 8, 1943 to the late Salvatore (Sam) Ciaramitaro and Rose Fulco Machulis. Rose was predeceased by her beloved husband, George W. Robinson in 2015. Rose worshipped at the Saginaw Wesleyan Church as her health permitted until the past few years. Rose enjoyed cooking, sewing and genealogy and was fiercely proud of her Sicilian-Italian heritage spending over 3 decades devoted to her family tree research. Rose felt blessed to have attended last summer’s family reunion. She also had a great love of her jewelry collection and favored bright colors and bold patterns. At times funny, sassy, blunt and vulnerable she was a firm believer in karma. Having spent nearly 5 years in care institutions Rose lived her last 9 months at the Bay County Medical Care Facility in Essexville and often remarked that she felt like she had gone to Heaven due to the outstanding medical/nursing care she received and especially due to the staff and residents who became genuinely fond of Rose as she also was of them. Rose is survived by 3 brothers, Fred and Marilyn Ciaramitaro of Chesaning, Sam and Barb Machulis of Alpena and Matthew Machulis of Bay City. She also leaves 4 children, several grandchildren and great grandchildren, several nieces and nephews, numerous cousins, an uncle, Joe Fulco and an aunt, Josie Lazarowich both of Bay City. She was also predeceased by her brothers Ralph Machulis and Joseph Machulis, Jr., grandparents Onofrio and Rosa (DiMercurio) Ciaramitaro and Ralph and Anna (Ferranti) Fulco. It was Rose’s express wish that there be no funeral or memorial service, that cremation take place and her ashes be interred next to George’s at Floral Gardens Cemetery in Bay City. A very heartfelt thank you to Dawn Gould, SW at BCMCF, for her genuine friendship, counseling and all manners of assistance given to Rose. Rose’s sufferings on Earth have ended and she is born again as she firmly believed. If you would like to make a donation in her memory please consider Bay County Medical Care Facility Activity Dept or Saginaw Wesleyan Church.

The family of Rose Mary Robinson created this Life Tributes page to make it easy to share your memories.

Send flowers to the Robinson family.