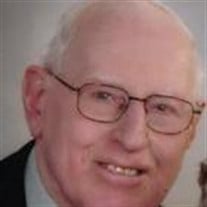 McLellan, Robert BurnsSaginaw, MichiganPassed away on Saturday, January 12, 2013 with his family at his side. Robert (Bob) was born on May 9, 1921 in St. Charles, MI to the late Daniel and Josephine (Little) McLellan. He married his bride of 66 years, Delores (Dee) Morrison on June 15, 1946 at Guardian Angels Catholic Church in Hemlock, MI. He was an avid Tiger fan, especially enjoyed attending sporting events of his children and grandchildren, and loved long summer vacations with family at the “Farm”. Bob will be remembered as a caring soul with a big heart. He has left an impression on many with stories and lessons of life. He had a wonderful sense of humor and was very spiritual. He loved tinkering in his garage and listened to polka music and bluegrass. For most of his adult life, he was a member of Ss. Peter & Paul Catholic Church, where he served as Business Manager for several years. He also sat on the parish finance committee, served as an usher, helped count collections and volunteered his time for funeral luncheons. Bob began farming the family soil while he was still in elementary school and still share- cropped the property to local farmers through the 2012 season. In 1940 Bob began working at Saginaw Foundry and remained there until 1962. In 1956 he started the credit committee for the foundry, which led to his employment as Treasurer and Manager at Amalgamated Local 455 Credit Union in 1958, where he remained until his retirement in 1986. Bob served on the Credit Union Supervisory Committee and Executive Board at the state level, which led to his involvement with federal lobbying efforts to further the credit union movement. Bob was also a founder of West Catholic Credit Union (later merged with Amalgamated Credit Union). He took a break from the workforce on August 5, 1943 when he was drafted into the Army during World War II. Bob earned a Bronze Star for his efforts in the Rhineland, Ardennes and Central Europe Campaigns, as a Technician 5th grade at Headquarters Campaign III Corps. He was honorably discharged on November 3, 1945. His three brothers were also drafted in the military and served in the war during this time span. Bob was also a member of American Legion Post 439. Surviving Bob, besides his wife Delores, are two sons and three daughters; Jim McLellan, White Bear Lake, MN; Mary Walraven (Lawrence Jr.) of Saginaw; Christina McLellan, Saginaw; Patricia Smith (Jackie), Shreveport, LA; Dan McLellan (Risha), Ft. Wayne, IN; daughter in law Kathy McLellan, Saginaw and one predeceased son, Robert H. McLellan (Kathy); several grandchildren: Robert H. McLellan Jr. (Kim), Saginaw; Jim Spradlin (Linda) Saginaw; Anne Marie Midcalf, Saginaw; Heather Lundberg (Steve) of White Bear Lake, MN; William McLellan of Las Vegas, NV; Matt McLellan (Melissa Baselone) of Saginaw; Katie Johnson (Eric) of Saginaw, Kristin Globell (Joachim) of Greenwich, CT; Lawrence Walraven III of Munger, MI; Melinda Walraven, Kalamazoo, MI; Brittany Bemus (Benjamin) Wichita, KS; William Walraven of Minneapolis, MN; Cordelia McLellan of Fort Wayne, IN; Emily Smith of Shreveport, LA; Chandler McLellan of Fort Wayne, IN; and one predeceased grandson Michael Spradlin of Saginaw. Also several great grandchildren, nieces and nephews. Bob was predeceased by three brothers and one sister; Ed McLellan, Jack McLellan, Don McLellan and Mary Ferchau. Funeral Liturgy will take place on Wednesday, January 16, 2013 at 11am at Ss. Peter & Paul Catholic Church, 4735 W. Michigan Ave. Fr. John R. Johnson will officiate with burial in St. Andrew Cemetery. Visitation will be held on Tuesday from 2-8pm, with a Vigil service at 7pm at the McIntyre Funeral Chapel, 500 N. Michigan and on Wednesday from 10am until service at church. Memorials can be considered to Ss. Peter & Paul Catholic Church.

McLellan, Robert BurnsSaginaw, MichiganPassed away on Saturday, January 12, 2013 with his family at his side. Robert (Bob) was born on May 9, 1921 in St. Charles, MI to the late Daniel and Josephine (Little) McLellan. He married his bride of... View Obituary & Service Information

The family of Robert B. McLellan created this Life Tributes page to make it easy to share your memories.

Send flowers to the McLellan family.