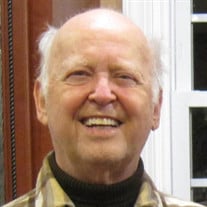 Ralph Lawrence Gregory, age 84, of Saginaw, passed away Sunday, April 12, 2020, at Covenant HealthCare from complications due to Covid-19. The son of Leonard Joseph and Tillie Gregory, Ralph was born on September 7, 1935, in Detroit, Michigan. Ralph was a devoted husband, first and foremost, and all of his hobbies complemented Trudy’s. For example, he liked to build things and she liked to grow cacti, so he built a greenhouse for her. He loved to photograph, so took pictures of all of her plants as well as family portraits and vacation photos. He had a great sense of humor that made the whole family laugh. Ralph graduated from Utica High School in 1954. He finished his bachelor’s degree in Chemistry at the University of Michigan after his January 20, 1957 marriage to Trudy, and then supported her, and subsequently, two kids, while Trudy went to medical school. After she became a physician, and was secure in a job, Ralph went back to school and, after only three years, earned his PhD in Chemistry, at Wayne State University. The research prompted him to create a darkroom at home where he became adept at developing micrographs and photographs (well before the time of digital photos!), and there-after he became the family photographer. Ralph’s career was predominantly working at Ford Paint and Vinyl Plant where he developed various materials/fabrics and bonded materials for the interiors and exteriors of vehicles. He worked there until 1991, after 32 years. In 1993, he moved on to TV production where he and Trudy produced 12 episodes of Bloomtime and a program describing the work of Master Gardeners. As they were both retired, they figured they’d spend more time on their farm. There they planted a chestnut orchard in 2003, at the beginning of the chestnut industry in Michigan and wound up in the chestnut business! It produced hundreds of pounds of chestnuts yearly, which they picked, processed, and sold, until 2013. Following serious health issues, they moved to Saginaw to live closer to their son and daughter-in-law. Ralph’s hobbies and talents were numerous: building furniture, model airplanes, cars, and ships; stamp and coin collecting; baking and cooking; playing chess; swimming, boating, shooting; photography; doing major landscaping, including a waterfall and pond at the Romeo home with in-situ boulders. In 1979, he built his own computer from a kit which now resides in the Henry Ford Museum in Dearborn, MI. Ralph wrote his own programs, using one to produce Macomb Audubon’s Earthstar newsletter, of which he was the editor for nine years. He seemed to know how to maintain and fix anything and everything. A real Whiz-kid, even in his later years, and all with his punster humor. Ralph is survived by his beloved wife, Gertrude “Trudy” Gregory; dear children, Leslie (Sherri) Gregory and Leora (Jay Avery) Gregory; brothers, Leonard Ronald “Ronnie” Gregory and Robert (Nancy) Gregory, and several nieces and nephews. He was preceded in death by his sister, Beatrice Milne, and his parents. Out of concern for the health and well-being of those family and friends who wish to pay their respects and celebrate a life well-lived, Ralph’s family plans to hold a memorial service at a later date to be announced. Meanwhile, all are encouraged to leave a tribute by going to www.fischerfuneral.com and searching for “Ralph”. In lieu of flowers, please consider giving donations in Ralph’s memory to The Nature Conservancy (https://nature.org), Physicians Committee for Responsible Medicine (https://www.pcrm.org), or Action on Smoking and Health (https://ash.org/). Ralph will be cremated, and burial of the urn will take place at a future date. We are truly thankful for the wonderful and courageous doctors, nurses, and aides who took care of Ralph. Their care was thoughtful, and extraordinary, with numerous video calls that allowed us some semblance of closeness, without actually being in the room. For more information, please contact Fischer Family Funeral Services at (989) 755-8277. To express your condolences, please visit www.fischerfuneral.com.

Ralph Lawrence Gregory, age 84, of Saginaw, passed away Sunday, April 12, 2020, at Covenant HealthCare from complications due to Covid-19. The son of Leonard Joseph and Tillie Gregory, Ralph was born on September 7, 1935, in Detroit, Michigan. Ralph... View Obituary & Service Information

The family of Ralph L. Gregory created this Life Tributes page to make it easy to share your memories.