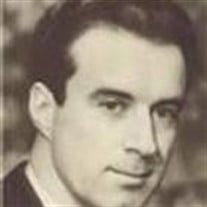 Petrus (Peter) Martin HolmSaginaw, MichiganBeloved husband, father and grandfather passed away peacefully at the age of 89 years, Wednesday, July 25, 2012, at home, surrounded by his family. Peter was born January 19, 1923, in Gyttorp, Sweden, the fifth son of the late Gunnar and Anna (Löfstedt) Holm. He married Leatrice Samson on November 29, 1957. They were blessed with fifty-four years of marriage, seven children, Anna (Paul) Mayer, Bridgeport, Ruth Kristin Singer, Freeland, Mary (Steven) Harvey, Saginaw, David (Marie) Holm, Brant, Thomas (Denise) Holm, Utah, Timothy (Wendy) Holm, Massachusetts, Benjamin (Kimmie) Holm, Saginaw, thirty-two grandchildren and nine great-grandchildren. Peter served in the Swedish Army during WWII. He came to the United States in 1954 to attend North Central Bible College in Minnesota, where he met his bride. He loved sharing the Gospel, listening to music, tinkering in his garage and was always so proud of his children and grandchildren. A Celebration of the Life and Legacy of Petrus Martin Holm will take place at 11:00 a.m. on Saturday, August 4, 2012, at Ames United Methodist Church located at 801 State Street in Saginaw, Michigan, with Reverend Mark Karls officiating. Family and friends may pay their respects at the church from 10:00 a.m. until time of the service. Cremation has taken place with arrangements made by the McIntyre Funeral Chapel.Those planning an expression of sympathy may wish to consider a donation to the Ames United Methodist Youth Ministries or a charity of choice.

The family of Petrus "Peter" Holm created this Life Tributes page to make it easy to share your memories.

Send flowers to the Holm family.