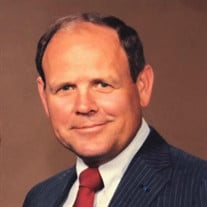 Paul R. Oakes, age 90, of Saginaw, Michigan, formerly of Angola and Indianapolis, Indiana, passed away surrounded by his family on Monday, October 7, 2019, following a valiant 10 year battle with Parkinson’s disease. The son of Charles and Louise (Fisher) Oakes, Paul was born August 12, 1929, in Anderson, Indiana. He married Mary Lou Wells on December 23, 1951. Paul started playing baseball at the age of 9, and by age 12 was the team pitcher and manager. He signed with the Brooklyn Dodgers out of high school and pitched in their minor league system until injuring his pitching arm. After being released by the Dodgers, he attended Ball State College where he met Mary Lou. He was drafted into the army and spent a year in Korea as a field telephone wireman. After his discharge, he joined Indiana Bell Telephone Company where he worked his way from digging and climbing poles into sales and sales management. Paul changed careers and joined the Connecticut Mutual Life Insurance Company in 1960 as an agent. He later became superintendent of agencies in Hartford, CT and moved back to Indianapolis to become a general agent in 1972. Paul was nominated as a candidate for the United States Congress and also served as Richard Lugar’s campaign manager during his successful campaigns for the U.S. Senate in 1976 and 1982. Paul had a lifelong love of fishing that started at a very young age while fishing with his parents. He hosted TV fishing and outdoors shows in Indianapolis and Ft. Wayne, as well as a call-in radio fishing show, and wrote a newspaper column for the Angola paper. He made 33 trips to fish with 49 different partners on his beloved Crow Duck Lake in Manitoba, Canada, and was proud of having fished in 43 states, 4 Canadian provinces and Mexico. He also taught a fishing class at Tri-State University at the age of 77 and published a book on fishing. He was an avid runner and tennis player in younger years. For many years, Paul worked to bring professional sports to Indianapolis. He founded the Indianapolis Professional Sports Association and was appointed stadium commission chairman in 1977. He arranged the meeting with Robert Irsay, owner of the Baltimore Colts, that ultimately led to the Colts’ move to Indianapolis. He was a proud season ticket holder for the first ten years, and almost never missed a televised game after that. Paul served as lay chairman of Carmel United Methodist, Westview and Crestview Christian churches, and president of the central Indiana Fellowship of Christian Athletes. He was the chairman of the Indiana Citizens Against Legalized Gambling and past distinguished president of the Westside Indianapolis Optimist Club. Paul and Mary Lou retired to Ball Lake in Hamilton, IN in 1992 where he served as president of the Lake Association. He served on the Steuben County Lakes Council Board of Directors as a member of the Governor’s Lakes Work Committee. He actively promoted and pursued the Center Lake Project even after leaving Angola for Saginaw. Above all else, Paul was a devoted family man. He is survived by his loving wife of almost 68 years, Mary Lou; children, Jeff Oakes of Westfield, IN; Jayne Bauer and her husband Mike of New Braunfels, TX; Karen Smith of Saginaw, MI; 5 grandchildren; Nick Oakes, Katie Bauer, Alex Bauer, Taylor Wrubel and her husband Sean, and Dylan Smith; brother Jerry and his wife DeVere, and numerous nieces and nephews. He was preceded in death by daughter Marsha, his parents, and his sister Barbara Collier. A Memorial Service/Celebration of Life will be held on Saturday, November 9th at 3:00p.m., at Angola United Methodist Church, 220 West Maumee Street, Angola, Indiana 46703, with a reception to follow. For additional information, please call Fischer Family Funeral Services at (989) 755-8277 or visit www.fischerfuneral.com. In lieu of flowers, donations may be made to Angola United Methodist Church, care of the church, or The Michael J. Fox Foundation, Donation Processing, Post Office Box 5014, Hagerstown, MD 21741-5014.

The family of Paul R. Oakes created this Life Tributes page to make it easy to share your memories.

Send flowers to the Oakes family.