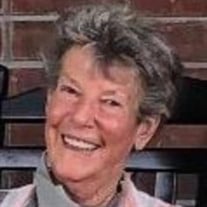 Myrna Jean (Walker) Johnson passed away on Wednesday, November 25, 2020 at her son’s home in Harker Heights, Texas. Born in Saginaw on May 20, 1941 Myrna was the second child of Lucile (McCue) and Lawrence Walker. She attended public schools in Saginaw graduating from Arthur Hill High School in 1959. She attended Sullins College in Bristol Virginia for one year and then ventured into the business world. She moved to Los Angeles in the fall of 1961. In 1963 she married Richard Austin (DJ) Johnson. They had three children: Lori, Erik, and Ryan who they raised in the Clairemont Mesa area of San Diego. Myrna spent most of her career working for LATCO (Los Angeles Tile Company) eventually rising to sales manager for the western United States. Upon their retirement Myrna and DJ still craved interpersonal connection so they embarked on the craft fair circuit spending almost every weekend at art fairs in southern California and Arizona offering unique products created from stone that they personally selected and crafted into vases and oil lamps. In 2003 they moved to Hereford AZ. to be closer to their children and their art fair venues. They especially enjoyed having the artist enclave of Bisbee, AZ only a few miles away. Upon DJ’s passing in 2014 Myrna moved to Harker Heights, Texas, right across the street from her son Ryan and family. Although being 79 years old and living alone she completely repainted the inside of her new home and xeriscaped the front yard by herself. Myrna was preceded in death by her parents, her brother Sam, and her husband. She is survived by her brother, Chris Walker (Beth) of Saginaw, MI; her daughter Lori Pickens (Christopher) of Glendale, AZ, her son Erik Johnson of Tucson, AZ, her son Ryan Johnson (Melinda) of Harker Heights, TX, grandchildren Kristy Davis, Jennifer Grams (Noah), Brittney Pickens, Cody Johnson, Shelby Johnson, Samantha (Johnny) Lamb, Ryan Johnson Jr., Tyler Johnson, and great-grandchildren Dominic Ashlin, Everett Graham, and Addison Johnson. There will be a celebration of Myrna’s life at some point in the future when family and friends can gather to share stories and hugs.

Myrna Jean (Walker) Johnson passed away on Wednesday, November 25, 2020 at her son&#8217;s home in Harker Heights, Texas. Born in Saginaw on May 20, 1941 Myrna was the second child of Lucile (McCue) and Lawrence Walker. She attended public... View Obituary & Service Information

The family of Myrna Johnson created this Life Tributes page to make it easy to share your memories.

Send flowers to the Johnson family.