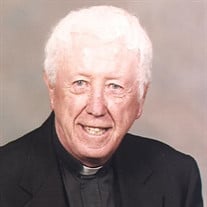 The Rev. Michael Leo Maher, 96, a senior priest of the Catholic Diocese of Saginaw, who celebrated 70 years of priesthood last May, died on Saturday, January 5, 2019. Father Maher was born October 9, 1922 in Bay City, Michigan, to the late Stafford and Nina Maher. He received his elementary education at St. Andrew Catholic School in Saginaw and St. Bernard Catholic School in Alpena, Michigan. He received his secondary education at St. Bernard High School in Alpena and St. Andrew High School in Saginaw. Father Maher began his priestly formation at Sacred Heart Seminary in Detroit, where he went on to graduate college and study philosophy. He continued his priestly formation at St. Mary Seminary in Baltimore, Maryland, where he earned his Bachelor of Sacred Theology. He was ordained to the priesthood on May 22, 1948 by the Most Rev. William Francis Murphy, Bishop of Saginaw, at the Cathedral of Mary of the Assumption in Saginaw. Father Maher served as assistant pastor at the Cathedral of Mary of the Assumption. He served as pastor at St. James, Wittemore; St. John the Baptist, Carrollton; St. Vincent de Paul, Bay City; St. Helen, Saginaw; and St. Hedwig, Bay City. Father Maher’s appointments during his years of priestly ministry included Director of the Propagation of the Faith and Director of the Pontifical Association of the Holy Childhood. He became a senior priest of the Diocese of Saginaw on July 8, 1992. He is survived by his seven nieces and nephews; six great nieces and nephews; close friend, Barbara S. Taylor; and adopted family, Corrine and Donald Baker. He was preceded in death by his parents; his siblings, John S. Maher, Jr. and Peggy Anderson; and one nephew. Father Maher’s Funeral Liturgy will be celebrated at 11:00 a.m. on Friday, January 11, 2019, at Christ the Good Shepherd Parish, St. Helen Catholic Church, 2445 N. Charles, Saginaw. The Most Rev. Walter A. Hurley, Apostolic Administrator of the Diocese of Saginaw, will preside and the Rev. Fr. Ronald Wagner will be the homilist. Visitation will take place on Thursday, January 10, 2019, from 2:00 p.m. to 8:00 p.m. at Christ the Good Shepherd Parish. A Vigil for the Deceased, led by Rev. Fr. Thai Nguyen will begin at 7:00 p.m. Visitation also will take place on Friday, January 11, 2019, for an hour prior to the Funeral Mass. Memorials in honor of Father Maher may be made to the charity of your choice. For information, please call Fischer Family Funeral Services at (989) 755-8277. For online condolences, please visit www.fischerfuneral.com.

The Rev. Michael Leo Maher, 96, a senior priest of the Catholic Diocese of Saginaw, who celebrated 70 years of priesthood last May, died on Saturday, January 5, 2019. Father Maher was born October 9, 1922 in Bay City, Michigan, to the late Stafford... View Obituary & Service Information

The family of Rev. Fr. Michael Leo Maher created this Life Tributes page to make it easy to share your memories.

The Rev. Michael Leo Maher, 96, a senior priest of the Catholic...

Send flowers to the Maher family.