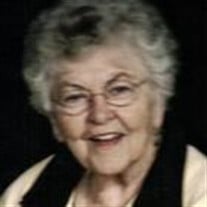 Stevens, Mary LouiseBridgeport, MichiganMary Lou, age 89, died on Friday November 15th at Brookdale Manor in Saginaw. Mary Lou was born in Bay City, Michigan on January 31, 1924 to the late Bert and Gladys (Janisse) Thomas. She married Charles “Hank” Stevens on September 5, 1943 in Arkansas. Hank, who passed away just three weeks ago and Mary Lou just celebrated their 70th anniversary together with all of their family around them. Mary Lou worked at Michigan Bell and the Saginaw Chamber of Commerce. She was a member of the Saginaw League of Catholic Women, St. Christopher Alter Society, and Saginaw County 4-H. Mary Lou loved traveling, camping, roller skating, singing and dancing. She is survived by her sister-in-law, Catherine Brush, 3 daughters, Susan (Rudy) Heckmann), Debby (Michael) Wierzbinski, Jeanne (Jim) Conger. Also surviving are her 9 grandchildren and 18 great grandchildren. She is preceded in death by her husband Charles Stevens on October 22, 2013, her daughter Mary Kay in September of 1952 and her step father Edwin Kuhnke. Funeral Liturgy will be held on Tuesday, November 19, 2013 at 11am at St. Christopher Catholic Church, 3926 Williamson Rd. Fr. John Mancini will officiate. Visitation will take place on Monday from 4-8pm at the McIntyre Funeral Chapel, 504 N. Michigan Ave. and at the church on Tuesday from 10am until time of service. Memorials can be considered to St. Christopher’s Church in Bridgeport, Michigan.

The family of Mary Louise Stevens created this Life Tributes page to make it easy to share your memories.

Send flowers to the Stevens family.