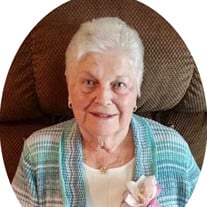 Mary Lou Oakes, beloved mother and grandmother, age 89, of Saginaw, Michigan, formerly of Angola, Carmel, and Indianapolis, Indiana, passed away surrounded by her family on Tuesday, September 29, 2020. The daughter of Arthur and Clara (Harless) Wells, Mary Lou was born June 19, 1931, in Anderson, Indiana. She was born during the depression and her family struggled to provide her basic nourishment as a young child, but in spite of that, she flourished and was a spirited student in school and a tomboy at heart. She was intelligent and studious, was the valedictorian of her high school class, and went on to be the first in her family to go to college, after earning a scholarship. Mary Lou started her college career at Ball State University, with plans to become a teacher. It was there that she met and fell in love with Paul Oakes. Their courtship led to engagement, and when Paul was drafted soon after, Mary Lou gave up her promising college career to begin working full time. She and Paul were married on December 23, 1951, just before Paul shipped out to Korea. Paul preceded her in death on October 7, 2019, just months shy of their 68th anniversary. Mary Lou and Paul raised four children. When their oldest child was in high school, Mary Lou began working as a secretary at the high school. She later worked as a legal secretary in Carmel, IN. Mary Lou had many talents including cooking, sewing, needlepoint, knitting, cross stitch, crocheting, singing, and playing the piano. She also became an avid runner and tennis player. She sang in church and performance choirs and choral groups, participated in book, music, and craft clubs, and volunteered weekly at the hospital in Angola. Mary Lou was an animal lover and had many beloved cats that brought immeasurable joy to her life, in addition to other pets and wildlife she attempted to rescue. She was also a sports fan and loved watching tennis, or one of “her teams” – Purdue, the Colts, and the Reds. She was filled with a strong Christian faith, participated in years-long bible study, and was a faithful church choir member for over 70 years in multiple cities. Mary Lou was, above all else, a devoted, selfless, and loving mother and grandmother. She and Paul had to wait until their early sixties to become grandparents, and to say that Mary Lou was delighted when each of her five grandchildren came along is an understatement. Her loving nature and her great sense of humor and fun made her beloved by all, especially her grandchildren. They treasure their precious memories of fun times spent with her. Mary Lou was active, talented, and intelligent, a loving wife and mother, kind and caring, and simply beautiful… inside and out. She will be deeply missed. Mary Lou is survived by her children, Jeff Oakes of Westfield, IN; Jayne Bauer and her husband Mike of New Braunfels, TX; Karen Smith of Saginaw, MI; 5 grandchildren; Nick Oakes, Katie Bauer, Alex Bauer, Taylor Wrubel and her husband Sean, and Dylan Smith; brothers-in-law, Myron Baumer, and Jerry Oakes and his wife DeVere; numerous nieces and nephews, including a very special niece, Pamela Popejoy. Mary Lou was preceded in death by her husband, Paul; their daughter, Marsha; her parents; her sisters, Norma Jean Williams and Lois Ann Baumer; and her sister-in-law, Barbara Collier. A memorial celebration of life will be held in the spring of 2021, due to COVID-19 considerations, at Angola United Methodist Church in Angola, IN. Date to be determined. In lieu of flowers, donations may be made to the ASPCA at www.aspca.org or to Angola United Methodist Church at angolaumc.org. For information please contact Fischer Family Funeral Services, 989-755-8277. Online condolences may be found at www.fischerfuneral.com.

The family of Mary Lou Oakes created this Life Tributes page to make it easy to share your memories.

Send flowers to the Oakes family.