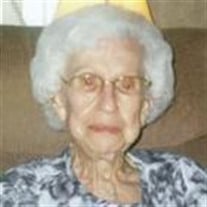 Sova, Margaret R.Saginaw, MichiganPassed away on Monday morning, September 9, 2013 at age 100 years. Margaret Beuthin was born in Saginaw on January 31, 1913. She married Emmett J. Sova, Sr. in 1932. He predeceased her in 1987. Margaret retired as owner of Cottage Bakery in 1980. She was a member of the Women of the Moose, St. Andrew Altar Society and Healthsource Saginaw Auxiliary. She enjoyed crocheting, reading, yard work and dining out. Margaret is survived by her children and their spouses; Delores and Robert Sweig of San Diego, Ca., Carole and William Taylor of Saginaw, Sandra Thomas of Escondido, Ca., a daughter-in-law Mary Sova of Saginaw, a sister-in-law Ceil Sova of Freeland and a niece Judy Charette. She is also survived by eight grandchildren, fifteen great grandchildren and eight great great grandchildren. She was predeceased by two brothers Clarence and William Beuthin, a sister Esther Fischer, a son Emmett Sova Jr., and a grandson Johnny Taylor. Funeral service will be held on Friday, September 13, 2013 at 10am at St. Andrew Catholic Church, 612 N. Michigan. Fr. Ronald Wagner will officiate with burial in St. Andrew Cemetery. Visitation will take place on Thursday from 4-8pm at the McIntyre Funeral Chapel, 504 N. Michigan and at the church on Friday from 9am until service. Margaret’s family wishes a very special thank you to Dr. Jehad Jafari and the nurses and staff at Covenant Harrison 7th Floor for all of their care and support.

The family of Margaret R. Sova created this Life Tributes page to make it easy to share your memories.

Send flowers to the Sova family.