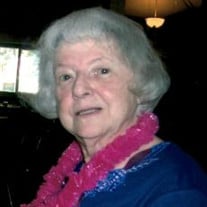 Lucienne “Luci” Osborn, age 102, of Ann Arbor, went to be with the Lord on Sunday, October 3, 2021, under the loving care of her family in Saginaw. She was born October 11, 1918, in Liege, Belgium to Eugene and Regina Raimond. Luci met her future husband, Basil “Osy” Osborn in 1946. He was stationed in Liege in the Army’s Special Services that involved setting up programs and activities to entertain the troops in Liege. Luci was invited by a friend to a movie for the troops and met her husband there. This was the beginning of a romance that lasted 57 years. Osy and Luci were married on August 14, 1947, and lived with her in-laws in the State of Illinois before moving to Dexter, Michigan where Osy taught mathematics at the High School. During this time, Luci, who had been an elementary school teacher in Belgium, received her certification to teach in the United States with her B.A. in education from the University of Michigan in June of 1958. In June of 1961, Luci received her M.A. in Romance Languages and Literature. That same year, she started teaching French and later Spanish at Slauson Junior High School in Ann Arbor, Michigan. Throughout her teaching career, she always said that she loved her colleagues and shared many fond memories of her students with the family. Luci continued her teaching career until her retirement from the Ann Arbor Public School System in 1983. In 1985, she started teaching weekly French classes at the Ann Arbor Senior Center and enjoyed playing Bridge with her many friends until September of 2010 when she was forced to stop and slow down due to heath challenges. The Senior Citizens Center became a big part of her life for many years after her retirement. Like Josephine Baker, Luci said that she had two loves, the United States and her country of origin, Belgium. Osy preceded her in death on November 5, 2003. Luci is survived by her two sons, Paul (Jeanann) Osborn of Saginaw, and James Osborn of Tucson, Arizona; granddaughter, Shontae, of Saginaw; her great grandsons, Caden and Amare of Saginaw; nephew and niece, Claude and Monique Gaier and their families in Belgium, as well as nephews and nieces in the United States. Cremation has taken place. A private memorial garden service will be held at a later date when she will be buried next to her husband on the grounds of the First Presbyterian Church, 1432 Washtenaw Avenue, Ann Arbor, MI, 48104. Memorial contributions may be made in her name to the church or to the Ann Arbor Senior Center, 1320 Baldwin Avenue, Ann Arbor, MI 48104. For information, please contact Fischer Family Funeral Services at (989) 755-8277. To express your condolences, please visit www.fischerfuneral.com.

The family of Lucienne Raimond Osborn created this Life Tributes page to make it easy to share your memories.

Send flowers to the Osborn family.