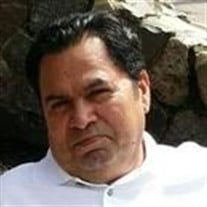 Juan Felipe Delgado, Sr. (Johnny) of Saginaw, Michigan passed away on Friday, July 17, 2015 at St. Mary’s Hospital with his loving family surrounded by his side. He was 68 years old. Johnny was born on June 24, 1947 in San Antonio, Texas and moved to Saginaw as a young child. He graduated from Saginaw High School in 1965, and married his high school sweetheart Catherine Diaz in 1966. He worked for General Motors and retired after 42 years of service. He will always be remembered for the love he had for his loving wife Cathy. He considered his children and grandchildren a blessing from God. He loved spending time with his brothers Robert, Richie, Jerry, Gilbert and cousin Phil talking about sports and their jokes that they shared with each other. Left to cherish his memory is his beautiful wife Catherine; loving mother Esperanza Merino; mother-in-law Lola Colmus and five siblings: Robert Delgado Sr. (Angie), Richard Delgado (Theresa), Jerry Delgado (Velia), Gilbert Merino Jr.,( Rose) and sister Anita Merino; and two sister–n-laws, Linda Rundenza and Patricia Ramirez, and one brother-in-law Tim Colmus. Also surviving John are his three sons and one daughter: Juan Felipe Delgado, Jr. (Vieonca), and their children Erica (Elvis Machul), Ashley (Eric), Juan III (Stephanie), Semantha Cali, Cecilia (Pedro Juarez), Israel Quinn (Chelsa), Marcel (Mariah); Casimiro (Angela) and children Eric Storm, Seth Aaron, Lori Casandra and Catherine; Antonio (Jill) and their children: A.J. (Kelsey), Mya, Tony and Alicia; and John’s only daughter Esperanza (Hope) and fiance Tony Perez and kids Rainah Elese, Anthony Richard and Cody Joseph. And sixteen great-grandchildren (with another one on the way) fifteen of which belong to son number one. Also special cousins Phil (Pat) Flores, Janie Rodriguez and Adolpho Espinoza. Johnny was preceded in death by his sister Alicia (Alice) Rocha, Step-Father Gilbert Merino Sr., Brother-in-law Ralphael Ramirez, Father-in-law Manuel Cantu and special cousins Andres (Coy) Flores and Lola Fierros There were two reasons as to why the pool was installed Hope wanted a pink mink coat, a pink Cadillac, and a swimming pool at ten years of age. Her dad was able to provide two out of three, the pink mink coat which was a gift from Tilly Dale and the swimming pool, the second reason was to avoid sending the grandkids to the city swimming pool, Johnny wanted to keep his family together. John installed a swimming pool in his backyard to create special memories and was always open for many nieces and nephews to enjoy. Funeral services are scheduled as followed: Visitation will be held on Wednesday, July 22, 2015 from 4 – 8 p.m. at the McIntyre Funeral Chapel, 504 N. Michigan Ave. Saginaw, MI 48602 and at the church on Thursday, July 23, 2015 from 10 – 11 a.m. for public viewing followed by service at 11:00 a.m. at the Living Faith Family Ministries Church, 1902 Stone Street. Saginaw, MI. Pastor Frank and Rita Gallardo will officiate. The family would like to thank all family and friends that expressed their love and support in this difficult time for the loss of a great God-fearing man who was not afraid to share the gospel with family and friends. In lieu of flowers, please consider a donation to Living Faith Family Ministries Church which will be distributed to the Jewish Voice Ministries via Jonathan Bernis.

Juan Felipe Delgado, Sr. (Johnny) of Saginaw, Michigan passed away on Friday, July 17, 2015 at St. Mary&#8217;s Hospital with his loving family surrounded by his side. He was 68 years old. Johnny was born on June 24, 1947 in San Antonio, Texas... View Obituary & Service Information

The family of Juan Felipe Delgado, Sr. created this Life Tributes page to make it easy to share your memories.

Send flowers to the Delgado, family.