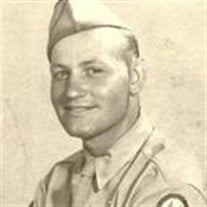 Symons, Joseph A.Saginaw, MichiganOn September 27, 2014 after 95 years of a loving life, Joseph Symons rejoined his heavenly family in the arms of angels. Joseph Arthur Symons was born on Stanley Street in Saginaw, on January 30, 1919 to Patrick Mark and Clara (Schmeck) Symons. At age 17, he served in the Civilian Conservation Core and then enlisted in the Army at age 23 to fight in WWII. He participated in The Battle of the Bulge as well as other battles in the European Theatre. His unit was the 54AA. Joe would become an active member of VFW Post 9809, serving as Commander from 1961-1962 as well as Captain of the Honor Guard. He was also a member of American Legion Post 22. He was a lifelong member of SS. Peter & Paul Catholic Church and served as an usher for many years. Joe worked as a machine operator for Eaton and retired after 41 years. Joseph was the last surviving member of his family; he was preceded in death by his brothers Bernard, Mark (Marty Simmons), and Thomas; and sisters Grace (Vansickle), Evelyn (Steiner), Mary (Rhode) and infant sisters Irma and Esther. Joe was married to Mary Frances West in 1949 and was the proud father of 11 children: Gloria (Mark) Symons-Sczepanski, Nancy (Ron) Willmar, Joyce (Ken) Droomer, John, Kathleen (Don) Blodgett, James, Phillip, Daniel (Carol), Jacqueline, David, and Jason (Brandy). He had 15 grandchildren and seven great-grandchildren. Funeral Liturgy will take place on Thursday, October 2, 2014 at 1:00pm at SS. Peter & Paul Catholic Church 4735 W. Michigan Ave. Fr. Steven M. Gavit will officiate with burial at Roselawn Memorial Gardens. Military honors will be conducted by American Legion Post 439. Visitation will be held at the McIntyre Funeral Chapel, 504 N. Michigan on Wednesday from 2-8pm with a military honor service at 6:30pm and a Vigil service at 7pm. Visitation will continue on Thursday at the church from 12:00 Noon until time of service. Memorials can be considered to the Wounded Warriors Project or a charity of donor’s choice.

Symons, Joseph A.Saginaw, MichiganOn September 27, 2014 after 95 years of a loving life, Joseph Symons rejoined his heavenly family in the arms of angels. Joseph Arthur Symons was born on Stanley Street in Saginaw, on January 30, 1919 to Patrick... View Obituary & Service Information

The family of Joseph A, Symons created this Life Tributes page to make it easy to share your memories.

Send flowers to the Symons family.