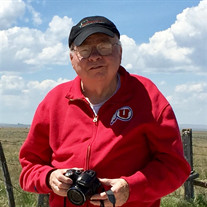 John Taylor Jones died February 15, 2020, at the age of 88. He was preceded in death by his wife of 64 years, Patricia Arlene Wilcox Jones. It was just like her to reach out and bring her sweetheart home on Valentine’s Day night. They are survived by their five children: Mark (Cheryl), Barry (Sheri), Alice Hauser (Michael), Patrick (Loriann) and James (Amberlyn); 35 grandchildren and 53 great-grandchildren. John was born January 4, 1932, the son of Lawrence Ahaz and Alice Taylor Jones in Salt Lake City, Utah. He was the sixth of seven children and is survived by his sister, Dorothy, and his brother, Don. He attended West High School. He was a combat infantryman in the Korean War where he served as a forward observer for a mortar company. He graduated with B.S. and Ph.D degrees in ceramic engineering from the University of Utah. He worked in both industry and academic settings including stints at Iowa State University and Lenox China where he was Vice President of Research and Development. He was a fellow of the American Ceramic Society. John and Patricia were married in the Salt Lake City temple September 15, 1953. He was deeply devoted to her and fully supported her in her work and avocations. He served a stake mission for two years. He was bishop for two congregations and served as scoutmaster multiple times. He helped people learn to lead themselves and, in turn, lead others. He was a faithful, loving minister. He was pragmatic and sensitive in his guidance and support of the downtrodden. He loved to help people feel and be included by serving and sharing their own talents with others. John loved birding and reported the first nesting starlings in the state of Utah as a young man. He loved to study shorebirds in the marshes of the Great Salt Lake. Where most would experience a confusing cacophony of muted browns, reds and grays as a bird took flight he would see genus and species. Few could outfish him and it was never too cold to hunt pheasants. He painted pictures and wrote stories and if he wasn’t at his typewriter or easel, he was singing and playing his guitar. Even then, he would drop everything to help a child with school work for as long as it took. It was great to have a dad that knew and could teach “everything” about math and science, and for those procrastinators, a literary mom who could type 120 words per minute. He was wise enough to retire to Arizona at a young age and bandy about with Mom. When Her health failed he devotedly cared for her at home for many years until she passed away. He loved to hold court with grandkids, especially those in college who would drive up to see him. To his family and friends John Jones was one of those “if all men could have just been like him” kind of guys. We deeply miss his presence. Once during a particularly fierce night battle in Korea, John turned his thoughts and fears to his Heavenly Father. The direct response to his heart and mind was: “John, it doesn’t matter whether you live or die. The only thing that matters is that you do your duty.” John lived, and now he has died. Through it all he faithfully did his duty to God, his family and mankind. Visitation will be held on Saturday, March 7, 2020 from 9:00 a.m. until time of Funeral Service at 11:00 a.m. at Russon Mortuary, 295 N. Main Street, Bountiful, Utah 84010. Interment will take place at Bountiful City Cemetery in Bountiful, Utah. For information, please call Fischer Family Funeral Services at (989) 755-8277. To express your condolences, please visit www.fischerfuneral.com

John Taylor Jones died February 15, 2020, at the age of 88. He was preceded in death by his wife of 64 years, Patricia Arlene Wilcox Jones. It was just like her to reach out and bring her sweetheart home on Valentine&#8217;s Day night. They... View Obituary & Service Information

The family of John Taylor Jones created this Life Tributes page to make it easy to share your memories.

Send flowers to the Jones family.