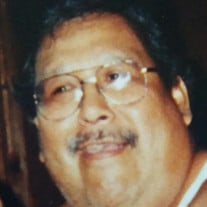 Jesus “Jessie” Rodriguez Jr., age 63, passed away at 6:08 a.m., Thursday, June 22, 2017, suddenly from heart complications at Covenant Hospital. Jesus was born July 27, 1953, in Saginaw, MI to Jesus Rodriguez Sr. and Juanita (Sanchez) Rodriguez. He graduated in 1971 from Saginaw High School and served in the US Navy from 1971-1974 in the Vietnam War. Jesus was not an ordinary person, he enjoyed all of his family and friends. He loved to be outside, fishing was his favorite activity. He was a big Martial Art movie fan, football fan, and wrestling fan. His favorite team was the University of Michigan Wolverines. He was an amazing cook, an amazing dad, husband, brother, friend, uncle, and grandpa. He was the rock and was the person who everyone could depend on to be there. He is survived by his wife, Joann (Kubacki) Rodriguez, four loving brothers, Rick Sanchez, Rudy Rodriguez, Davie Hernandez, Rick (Peggy) Hernandez; five loving sisters, Susanna Irwin, Kimberly (Danny) Wilson, Diana Rodriguez, Victoria Henry and Mary Rodriguez. Jesus is survived by seven of his eight children, Kimberly Nason, Stacey (Jeremiah) Routhier, Jessica Rodriguez, Mary Ann (Ruben) Sanchez, Jessie Rodriguez III, Angel (Stephanie) Rodriguez and Rebecca Zamora. He was blessed with 16 grandchildren, Aaron, Andrew, Daniel Jr., Graciella, Ruben, Liem, Austin, Hazen Jr., Rosaleen, AnnMarie, Ashley, Rebecca, Adam Jr. Marilyn, Imari and Anthony; and 6 great-grandchildren, Hazen Beau, Jax, Daniela, Valerie, Jeanette and Elena and much more that he was a grandpa to. Jesus is survived by many nieces and nephews, as well as friends and extended family. He is preceded in death by his parents, Jesus and Juanita Rodriguez, his son, Jesus Rodriguez II, his niece, Juanita Rodriguez, and his brother-in-law, Tommy Irwin. Visitation will be held from 10:00 a.m. until the Funeral Service at 1:00 p.m., Friday, June 30th, at Fischer Family Funeral Home, 504 North Michigan Avenue Saginaw, MI 48602. We ask all who attend to wear a baseball hat of your choice, but preferably U of M or U.S. Military in honor of him. Hats will be allowed during the service. Contributions in memory of Jesus may be made to his wife, Joann Rodriguez.

The family of Jesus Rodriguez Jr. created this Life Tributes page to make it easy to share your memories.

Send flowers to the Rodriguez family.