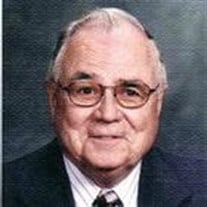 Call, James R. Saginaw,MichiganPassed away June 8, 2012 at the Cartwright Care Center at age 91 years. Jim was born in Upper Jay, NY on May 31, 1921 to the late Frank and Anna Call. He was married to Arline Bismark on September 7, 1940. She predeceased him. Jim was employed and retired from the State of Michgian Department of Transportation. He served his country honorably during World War II. He was a member of St. Matthew Catholic Church of Zilwaukee, the State Employees Retirement Association and the American Legion Post #22. Jim lived a life of love and compassion to all. He was known as Saint James at Westcourt because of gathering his fellow Catholics together for the rosary and mass. Everyone that came into his life left with a chocolate bar. He was loved dearly by his family and everyone he met became his friend.Surviving are his daughters; Sandra Jean (Donald) Wiedbrauk of West Branch, Gail Ann Call of Saginaw, Pamela Marie (William) Menzl of Zilwaukee and Marybeth (Robert) Suhr of Roscommon. Also his grandchildren: Shawn Williams, Kristi Johnston, Donald Wiedbrauk, Jr.; Carla Dunn, Collette Smith, William M. Menzl, Renee and Blake Suhr. He is also survived by his great grandchildren: Chelsea and Skyler Williams, Anthony and Emily Johnston, Megan, Emily, Thomas, John, Lily Grace and Wil David Smith, Andrew and Sarah Menzl, Alec, Piper Mae and Madoc Dunn; great great grandchildren, Max Tompa, Lola Dunn, Sage Elizabeth Papaik. Also a sister Barbara (Howard) Reinke, brothers William and Thomas (Nelljean) Call, a sister in law Vicki Call and his special friend Bonnie Wilson-Matta. He was predeceased by his son Joseph R. Call, brothers Frances, Bernard and Vincent Call and his sister Doris Kirchner.Funeral mass will be held on June 12 ,2012 at St. Matthew Catholic Church of Zilwaukee. Fr. William Taylor will officiate with burial in St. Andrew Cemetery with military honors conducted by the American Legion Post #22. Visitation will take place at the McIntyre Funeral Chapel, 500 N. Michigan on Monday from 3-8pm with a vigil service at 7pm and at the church on Tuesday from 10am until service. Memorials can be considered to the American Diabetes Association, Hospice of Michigan or to the Cartwright Care Center.

Call, James R. Saginaw,MichiganPassed away June 8, 2012 at the Cartwright Care Center at age 91 years. Jim was born in Upper Jay, NY on May 31, 1921 to the late Frank and Anna Call. He was married to Arline Bismark on September 7, 1940. She... View Obituary & Service Information

The family of James R. Call created this Life Tributes page to make it easy to share your memories.

Send flowers to the Call family.