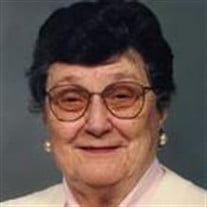 Murphy, Ione M.Thomas Twp., MichiganPassed away July 29, 2013 at the St. Francis Home at age 94 years. Ione was born September 7, 1918 to the late Emil and Marie Roy Nothelfer. She was married to Monroe Murphy on October 15, 1936. He predeceased her October 5, 1973. She was a charter member of Holy Spirit Catholic Church, a member and past president of its Altar Society. Ione was a member of the League of Catholic Women and enjoyed time spent helping with the Prayer Line. She also volunteered at the Healthsource gift shop and at the Saginaw County Fair. Surviving are her children: Dale and Gladys Murphy, Dean and Joyce Murphy, Don and Carol Murphy, Marcia Knapp, Maureen and Greg Catalano. She is also survived by 16 grandchildren, many great grandchildren, relatives and friends; as well as, her three brothers Bernard Nothelfer, Norris Nothelfer, Orrin and his wife Barbara Nothelfer and three sisters Audrey Walton, Dixie Davis and Joyce Wilsey. She was predeceased by her son in law William Knapp, grandsons Earl and Eric Murphy, a sister Donelda Passow, three brothers Jerry, Farnumn and Justin Nothelfer and several in- laws. Funeral mass will be held on Friday, August 2, 2013 at 10am at Holy Spirit Catholic Church, 1035 N. River Rd. Fr. Peter Gaspeny will officiate with burial in St. Andrew Cemetery. Family and friends are welcome to visit at the McIntyre Funeral Chapel, 504 N. Michigan on Thursday from 2-8pm and at the church on Friday from 9am until service. A vigil service will be held Thursday evening at 7pm led by Sr. Marie Markel. Ione’s family extends a special thank you to the entire staff of the St. Francis Home for their kindness and care. Memorials can be considered to Holy Spirit Catholic Church or the St. Francis Home.

Murphy, Ione M.Thomas Twp., MichiganPassed away July 29, 2013 at the St. Francis Home at age 94 years. Ione was born September 7, 1918 to the late Emil and Marie Roy Nothelfer. She was married to Monroe Murphy on October 15, 1936. He predeceased... View Obituary & Service Information

The family of Ione M. Murphy created this Life Tributes page to make it easy to share your memories.

Send flowers to the Murphy family.