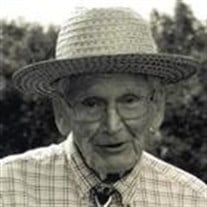 Dr. Hugh L. Sulfridge Jr., 97, Saginaw Orthopedic Surgeon, passed away on Thanksgiving morning at his home in Freeland surrounded by his family. He was born on September 20th, 1915 in Appalachia, Virginia to the late Hugh L Sulfridge, Sr and Ella Wynn Sulfridge. He graduated from the University of Virginia Medical School. During WW II he served as a medical officer on the USS Fletcher and then with the 3rd Marine Division/First Artillery Battalion in the South Pacific, including Iwo Jima and Guadalcanal. After the war, he completed his internship and orthopedic residency at Detroit Receiving and Harper Hospitals in Detroit. He married Peggy Potts in 1945, and in 1949 the couple moved to Saginaw, where they raised their family. In 1949 Dr. Sulfridge established the first orthopedic practice serving mid & northern Michigan. He was a pioneer in the development of joint replacement surgery, the Harrington Fusion for scoliosis, and corrective surgery for club foot. He established the Crippled Children's Clinics in the Tri-County area and ran clinics in both Alpena and Tawas for orthopedic patients from central and northern Michigan. A skilled pilot, he flew his plane to Northern Michigan once a week for over two decades to see patients at those clinics. During the Vietnam War, he volunteered twice with Project Hope as a surgeon in a field hospital in the Mekong Delta. He was an avid sailor, competing on many occasions in the Port Huron to Mackinaw races, including a single-handed race at age 71 and several double-handed races with son, Peter. In 1992, Captain Hugh celebrated the 500th anniversary of Columbus's discovery of the Americas by participating in the Columbus Sailing Regatta from Gibraltar, Spain to San Salvador. To join the Regatta in Spain, he sailed his 30-foot sailboat, The Arcadia, single-handedly across the Atlantic Ocean. He also had a passion for mountain climbing, skiing, scuba diving, bicycling, and horseback riding. Until three days before his passing, he rode his stationary bicycle 3 to 6 miles each day. Dr. Sulfridge is survived by his four children: Rebecca Wynn, Mary (John) Phillips, Peter (Sue) Sulfridge, Martha (Larry Knox) Sulfridge; four grandchildren: Toby (Jennifer) Rogers, Homer Williams, Nicholas (Becky) Sulfridge, Taylor (Paul) Moreira; and seven great-grandchildren. Survivors also include his sister-in-law, Betty Sulfridge, niece and nephew, Nancy and David Sulfridge, former wife, Beverly Sulfridge and long time devoted nurse/assistant, Betty Straub, and his wonderful caregivers, Jeff Webber, June Leddy , Rosalie Peters and Nicole Platt. He was preceded in death by his first wife, Peggy Potts Sulfridge and his brother, David W. Sulfridge. MEMORIAL SERVICE: According to Dr. Hugh's wishes cremation has taken place and a Memorial Service will be held at 4:30 p.m. on Monday, November 26, 2012 at the First Congregational Church, 403 S. Jefferson St., Saginaw. Dr. Todd Farley will officiate. VISITATION: It is hoped that friends will attend a slide presentation, a light repast, and share memories with the family in the church's Bradley House Center immediately following the service.MEMORIALS: Those planning an expression of sympathy may wish to consider memorials to First Congregational Church Organ Restoration Fund, Saginaw Optimist Club, or Leader Dogs For The Blind (www.leaderdog.org). Please share your thoughts, stories and memories at the church or through mcintyrefuneralchapel.com.

Dr. Hugh L. Sulfridge Jr., 97, Saginaw Orthopedic Surgeon, passed away on Thanksgiving morning at his home in Freeland surrounded by his family. He was born on September 20th, 1915 in Appalachia, Virginia to the late Hugh L Sulfridge, Sr and... View Obituary & Service Information

The family of Dr. Hugh L. Sulfridge created this Life Tributes page to make it easy to share your memories.

Send flowers to the Sulfridge family.