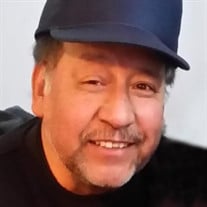 Mr. Gustavo “Gus” Barrientos passed away after a short battle with cancer, at his home on Tuesday, July 16, 2019 in Saginaw, Michigan, at the age of 71, surrounded by family. Gus is survived by his wife of 48 years, Billie Jean; his close brother, Ricardo Barrientos of Ohio; close sister, Maria Galvan of Waterford; three children and 10 grandchildren: Ruben (Tamara) Barrientos, their children, Ruben and Antonio, Roman (Kim) Barrientos, their children Victor, Miranda, Angelina, and Jasmine, and Juanita (Julio) Gonzales, their children Velencia, Michael, Julien, and Carlito; along with his 4 sisters, 3 brothers and his mother, Maria Vasquez. He is preceded in death by his father, Gustavo Barrientos; step-father, Tomas Vasquez, and two brothers, Victor and Luis Barrientos. Gus was born on December 18, 1947, in Piedras Negras, Mexico. He married Billie Jean Barrientos on July 1, 1971, in Hamilton, Alabama. After moving to Saginaw, Michigan, Gus began working for General Motors: Grey Iron in 1970 and later retired in February 1996. Gus was an accomplished guitar player and often played for his grandchildren. He was a generous individual who enjoyed working on cars, music, and watching sports such as football, Nascar, and boxing. He was a man of God and often quoted scripture. Gustavo’s grandchildren were his life and he would go above and beyond to provide for them. He also enjoyed playing with his special pal, Muffin “Meow Meow”, his rescue cat. Cremation will take place. The family would like to thank Compassus for their care and support and Gus’s special niece, Tina Barrientos-Medrano, for staying by his side along his final days as well as family friend and neighbor, Georgia Jackson.

The family of Gustavo Casarez Barrientos created this Life Tributes page to make it easy to share your memories.

Mr. Gustavo “Gus” Barrientos passed away after a short battle...

Send flowers to the Barrientos family.