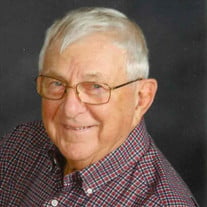 Gerald “Jerry” G. Smith of Saginaw Township passed away peacefully on Friday, September 28, 2018, at his home surrounded by family members. Jerry was born in Avon Township, Michigan on September 30, 1932. He married Louise Davis in Mt. Pleasant on November 28, 1957. Following his graduation from Oxford High School, Jerry served in the Air Force in Fairbanks, Alaska where he was an Air Policeman. He told us that one job he often had to do was rescue airmen who had overstayed their welcome at a local bar. Jerry earned his Bachelors and Masters degrees at Central Michigan University and was a teacher in the Saginaw City School District for thirty-two years; his last assignment was at the Saginaw High School, also known as “The High” where he often won a race against other teachers who were all members of the FATS club. He was a member of the YMCA for over forty years and enjoyed jogging along the Saginaw River. Gardening was one of Jerry’s passions and he was known in the neighborhood as the man with the big onions. He was also an avid golfer. Starting in the sixties, Jerry and Lou spent many of their summer days with family up at Whitefish Point, Michigan where they built a cottage on Lake Superior. Following their retirements, they spent several of the winter months in Panama City Beach, Florida; they and their other winter friends wanted to be known as “winter breakers”. Besides his wife, Louise "Lou", Jerry is also survived by his children, Dr. Laurie Smith, Karen (Gregory) Souran, Jeffory Smith, and Susanne (Brian) Denman; grandchildren, A.J. (Leslie) Denman, Alison Denman, Melanie Asalde-Smith, Sophia Souran, Lydia Souran, Blake Smith, and Molly Smith; plus great-grandson, Roland Denman. Memorial Visitation will be held Thursday, October 4, 2018, from 10:00 a.m. until the time of Memorial Service at 12:00 p.m., at Fischer Family Funeral Home, 504 N. Michigan Avenue, Saginaw, MI 48602. The service will be officiated by the Rev. Curt Norman of St. John’s Episcopal Church, Saginaw. Memorials in honor of Jerry may be given to the Parkinson's Foundation, 200 SE 1st Street, Suite 800, Miami, FL 33131 or to the East Side Soup Kitchen, Post Office Box 330, Saginaw, MI 48606. For information, please contact Fischer Family Funeral Services, 989-755-8277. For online condolences, please visit www.fischerfuneral.com.

The family of Gerald "Jerry" G. Smith created this Life Tributes page to make it easy to share your memories.

Send flowers to the Smith family.