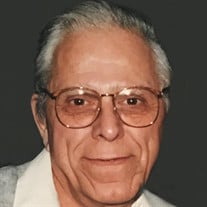 Ferris C. Arnold, age 95, of Saginaw, passed away on Thursday, May 28, 2020, at his home. The son of Ferris and Florence Arnold, Ferris was born March 2, 1925, in Saginaw, Michigan. He married Betty Lou Pol on December 29, 1945. With his marriage to Betty Lou came the blessing of her parents, Lucien and Helen Pol, who became his very own parents. Ferris and Betty Lou shared 68 years of marriage until Betty Lou preceded him in death in 2013. Ferris was a Sergeant in the Army and fought on the front lines during World War II. He bravely served as a Medic in Normandy and the Battle of the Bulge. Ferris was seriously wounded on two separate occasions and eventually earned two Purple Hearts with an accompanying cluster. He was also awarded a Bronze Star. He met both Generals Patton and Eisenhower during his time in the European Theater. Ferris worked for General Motors for 42 years, all the while working a second job at three drive-in movie theaters as a maintenance man. During this time, he also built two homes for his family. He had a lifelong interest in woodworking, crafting grandfather clocks, and music boxes. Ferris especially loved his family and they were the most important part of his life. Ferris is survived by his children, Ferris (Leslie) Arnold, Cindy (Nick DeFrancesco) Arnold, Dan Arnold, Beverly Arnold, and Jim (Angela) Arnold; grandchildren, Tim (Kelly) Arnold, Gretchen Arnold, Ben Arnold, Sara Scharrer, Beverly DePrekel, Calvin (Alex) Rusch, Leigha Rusch, Carol Arnold, Erika Arnold, and James Arnold; several great-grandchildren. Ferris was preceded in death by his wife, Betty Lou Arnold; his grandson, Tom DePrekel; and Helen and Lucien Pol, whom he considered his mother and father. Ferris’s family wishes to thank the dedicated caregivers who have lovingly been by his side over the years, Tammy Lotfi, Wendy Hamlin, and Jennifer Soule. They also wish to thank Wellspring Hospice and Dr. Mirza Hussain and his wife, Ruby, for their wonderful care throughout the years for both Ferris and his wife, Betty Lou. Private family visitation and funeral will take place Saturday, May 30, 2020, at Fischer Family Funeral Home, 504 N. Michigan Avenue, Saginaw, MI 48602. Rev. Curt Norman will officiate. Burial with military honors will take place at Oakwood Cemetery, Saginaw. Memorials in honor of Ferris may be made to the charity of your choice. For information, please call (989) 755-8277. To express your condolences, please visit www.fischerfuneral.com.

The family of Ferris C. Arnold created this Life Tributes page to make it easy to share your memories.

Send flowers to the Arnold family.