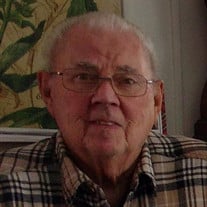 Chester “Chet” Brook Andrews Jr., age 93, of Saginaw, passed away at home with his family by his side on Saturday, June 19, 2021. The son of Charlotte (VanAnrooy) and Chester B. Andrews Sr., Chester was born December 11, 1927, in Grand Rapids, Michigan. He married Sally Johnson in 1951. In 1966, Chet and Sally moved the family to Saginaw where they became lifelong residents. Sally preceded him in death in March of 2021. Chet took a pause during his senior year in high school to join the army at the end of World War 2 and was stationed in the Pacific Theatre. He was honorably discharged with the rank of Tech Sergeant. He returned home and finished his high school education. He would land employment with the Detroit Ball Bearing Company and worked his entire career there mostly as an office manager. Chet retired from the Saginaw branch at 62 years of age. Chet’s favorite hobby was woodworking. He was very talented and made numerous pieces of furniture, cabinets, and display shelves and cabinets. Chet and Sally also made many craft items over the years and enjoyed selling their items at various craft shows in the area. He loved all his family very much and was always there for them. He and Sally were quite family oriented and supported everything their children did. Both were involved with the Saginaires Drum and Bugle Corps for many years in numerous capacities. In later years, Chet and Sally also belonged to the group Bootscooters, affiliated with the Saginaw Moose Lodge, and enjoyed many years of dancing and friendship with the other members. Chet is survived by his loving children, Blake (Sheri) Andrews, Cindy Andrews (Geri Callovi), and Chris Andrews (AnnMarie Doman-Monville); adored grandchildren, Chad (April) Andrews, Curtis Andrews, Kari (Jeff) Frederickson, and Cody Andrews; great grandchildren, Claire Andrews, Grace Andrews, Charlie Andrews, Hunter Frederickson, Holden Frederickson; numerous nieces and nephews. Chet was preceded in death by his parents; his beloved wife, Sally; and his siblings, William Andrews, James Andrews, Marguerita Andrews Padgett, Warren “Dale” Andrews, and Kenneth Andrews. Following cremation, a private committal service and burial will take place for Chet and Sally at St. Andrew Catholic Cemetery in Saginaw. Memorials in honor of Chet may be made to First State Home Health Care Hospice. The family would like to thank the staff from First State Home Health Care for their kindness and care. The family would also like to thank the staff from Homewatch Caregivers, and Saginaw County Commission on Aging for their assistance and support. For information, please call Fischer Family Funeral Services at (989) 755-8277. To express your condolences, please visit www.fischerfuneral.com

The family of Chester Brook Andrews Jr. created this Life Tributes page to make it easy to share your memories.

Send flowers to the Andrews family.