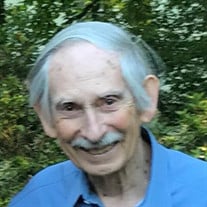 Bob Hastings completed his earthly journey with family at his side on Sunday, August 22, 2021. In his journey he played many roles. It began in 1933, growing up with parents Lucile and Clifford Hastings and his two brothers, Ken and Gary, who now live in California with their families. When completing his seminary degree he took on the role of husband after meeting Phyllis Getschman, who became eventually Dr. Phyllis Hastings. She shared with him many of his ventures in exploring and embodying new visions for renewing the church. Over the years they became parents and parents-in-law. First came Peter, now teaching Human-Computer Interaction in Chicago. Then Karis, now a satellite communications lawyer in the DC area, married to Joe Reynolds. Next was Julie, now an ESL teacher in Portland Oregon, married to Oren Kosansky. Then Mary Beth, working around the world in women’s reproductive rights, married to Howard Wilkins. Grandchildren Lucy (and later husband Cory), Alison and Hope; Jesse; Mica and Tali; and Sydney and Pine completed the immediate family circle. His professional roles over the years were diverse. His first ministry after seminary was to college students in Michigan and then California. Returning to Michigan with his developing family, he began his ministry as pastor and preacher. He was not heroic or glib. He had no easy answers for personal and social concerns, yet engaged in responding to them in places and situations around him, even to the point of getting arrested with others in a protest concerning war preparations. And he went where God and the bishop sent him, serving churches in Grosse Pointe, Flint, Highland Park, Center Line, Essexville, Kochville, Hazel Park, Dearborn Heights, and finally Saginaw before retiring in 2004. Phyllis’s Fulbright teaching year in Zaria, Nigeria, offered the novel role of shopper in Nigerian markets with their sights and smells. He also saw first-hand the results of Christian-Muslim conflicts, including damage to churches and mini-mosques and even violent protests about college student elections and frequent shut down of the university. But there were also the many caring interactions between Christians and Muslims, including intermarriage. Before and after retirement he was involved in many organizations caring for churches and communities: peace groups, ecumenical organizations, Kiwanis Club, and Habitat for Humanity. With his completed life, his legacy remains. Visitation for those who wish to pay their respects for Rev. Bob, will be held Friday, August 27, 2021, between 6:00 p.m. and 9:00 p.m. at his home, 1441 Cedar Street, corner of Holland Road, Saginaw, Michigan 48601. Park along Cedar or in the parking lot of Longfellow School on Remington. Masking is required; hugging is encouraged, but be brief. Visitation will continue Saturday, August 28, 2021, from 2:00 p.m. until the time of a Service of Thanksgiving and Farewell at 3:00 p.m. at Fischer Family Funeral Home, 504 N. Michigan Avenue, Saginaw, MI 48602. Masking is required for those not vaccinated. For those who are unable to attend the Thanksgiving Service in person, can participate via Zoom, link provided below for access. Join Zoom Meeting https://us02web.zoom.us/j/88547294304 Meeting ID: 885 4729 4304 Donations in his name are invited to either the outreach program of your faith community or to the Inter-faith Caring Center for East Side Saginaw, directed by Very Rev. Judy Boli and Prof. Phyllis Hastings. For information, please call Fischer Family Funeral Services at (989) 755-8277. To express your condolences, please visit www.fischerfuneral.com.

Bob Hastings completed his earthly journey with family at his side on Sunday, August 22, 2021. In his journey he played many roles. It began in 1933, growing up with parents Lucile and Clifford Hastings and his two brothers, Ken and Gary,... View Obituary & Service Information

The family of Rev. Bob Hastings created this Life Tributes page to make it easy to share your memories.

Bob Hastings completed his earthly journey with family at his...

Send flowers to the Hastings family.