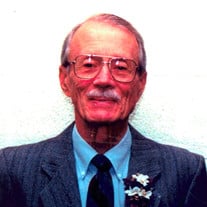 Barry F. Sedgwick, 97, of Haslett, Michigan, died peacefully on Friday, September 17, 2021, in Saginaw at the Aleda E. Lutz VA Medical Center. He was born on November 6, 1923, to Edward and Constance Sedgwick in San Diego, California. He was preceded in death by his parents, Edward and Constance Sedgwick, and brother Kenneth Sedgwick. His father was born in England and his mother in South Africa. Barry was very grateful to his immigrant parents for the opportunity they gave him to live in this great country. He never tired of its wondrous beauty, traveling by car, train, air, canoeing, and hiking. After the family settled in San Diego, Barry’s parents went to night classes, learned about this great country, passed their tests, and became nationalized citizens. Barry moved to Michigan in 1961 and went on to be employed by the Whitman & Barnes Division of TRW Corporation for 26 years, retiring in 1979 as Regional Sales Manager. He spent 8 years working for the Development Office of Starr Commonwealth for Boys (now Boys & Girls), retiring in 1987. He was a veteran of WWII, enlisting in the Army Air Corps in 1942 and served with the 13th Air Force in the South Pacific and the Forces of Occupation in Japan. He was a member of the Haslett Lions Club for 16 years and served as its president. Barry was a volunteer for Meals on Wheels, the American Red Cross, The Capital City Humane Society, and Junior Achievement. He was a life member of the Michigan Audobon and a member of the Nature Conservancy. He was also a member of the Haslett Community Church where he found many opportunities to volunteer, including the church food bank. At one point, Barry had entered the willed body program at MSU. Barry had a loving family of whom he was very proud; sons, Randy (Connie) Sedgwick and Rick (Robin) Sedgwick; granddaughters, Kristy (Dave) and Tammy (D.J.); grandsons, Zachary (Angela) and Jacob (Heather); nine great grandchildren, Anna, Garrie, Kendra, Isaiah, Gannon, Piper, Madeleine, Juliette, and Charlie. Burial with Military Honors will take place on Thursday, October 7, 2021, at 11:00 a.m. at Great Lakes National Cemetery, 4200 Belford Road, Holly, MI 48442. In lieu of flowers, memorials in honor of Barry may be made to Haslett Community Church, 1427 Haslett Rd., Haslett, MI 48840 or The Leader Dogs for the Blind, 1037 Rochester Rd., Rochester, MI 48307. For information, please call Fischer Family Funeral Services at (989) 755-8277. To express your condolences, please visit www.fischerfuneral.com.

Barry F. Sedgwick, 97, of Haslett, Michigan, died peacefully on Friday, September 17, 2021, in Saginaw at the Aleda E. Lutz VA Medical Center. He was born on November 6, 1923, to Edward and Constance Sedgwick in San Diego, California. He was... View Obituary & Service Information

The family of Barry F. Sedgwick created this Life Tributes page to make it easy to share your memories.

Send flowers to the Sedgwick family.