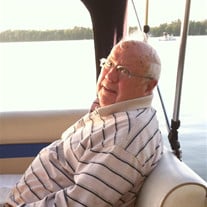 Arthur Thomas “Chum” Guimond, our beloved father, grandfather, and great-grandfather, passed away at Meadow View Memory Care on Tuesday, April 10, 2018, surrounded by his loving family, following complications due to Alzheimer’s Disease. He was born to Arthur E. Guimond and Mary Ann (Seass) Guimond in Detroit on March 27, 1926. After graduating from St. Francis De Sales High School in Detroit on June 11, 1944, he reported for duty in the U.S. Navy two days later. He served as a radarman on the U.S.S. Harry Taylor, a troop carrier, travelling all around the world. He was discharged on June 13, 1946. He married Mary Lucy Tait, his “best friend, ever,” in Detroit on January 24, 1948. He described her as “the most consistent and compelling influence in my life. I owe her so much for the happiness and joy that I’ve had for 50+ years.” She died on October 7, 1999. He married Carolyn Schmidt in Wyandotte on September 1, 2001. She died in 2013. After returning to Detroit from the Navy, he began work as an installer for Michigan Bell, where he worked from 1947 to 1961, when he joined the Michigan Credit Union League (MCUL), as a chapter representative. He was transferred to Saginaw, MI in 1964 to manage its district office, serving credit unions in the state’s northwestern lower peninsula. He retired from MCUL in 1990 as director of Consulting Services. During his tenure with the MCUL, he helped organize 25 Michigan credit unions. He and his wife Mary enjoyed travelling in retirement, visiting Mexico, Puerto Rico, the British Virgin Islands, as well as many places in the United States. One of his most memorable experiences was building his “Shangri-La,” a summer “camp” on Little Lake, near Marquette, MI. He built it on property he purchased from his mother’s family, next to the campsite he had been coming up to and enjoying since he was two years old. He was active in the Saginaw community, coaching the St. Andrew flag football team, serving on the St. Andrew’s Home and School Association and Parish Administration Committee, the Saginaw Diocesan Finance Council, was president of the Saginaw Big Brothers and vice president of the Saginaw Human Relations Commission. He was active in the Saginaw River Raft Race committee, the Saginaw Genealogical Society, and the Saginaw Civitan Club. He always enjoyed running, and participated in many races, including the Bay City St. Patrick’s Day races and the Crim Ten Miler in Flint; and in 1981 he and his three oldest daughters completed the Detroit International Marathon. He was also an avid racquetball player at the Saginaw YMCA. He was “handy” around the house, and completed many home remodeling and expansion projects for his family over the years. He and Mary enjoyed playing cards, entertaining, and visiting friends and family. He is survived by six children: Margaret (Bruce) Grathwohl of Naples, FL; Arthur (Jan) Guimond, Marie Guimond (Dave Tuskey), and Kathryn Guimond, all of Saginaw; Mark (Jeneese) Guimond of Grand Rapids, MI; and Amy (Steve) Stagg of Okemos, MI. He is survived by 18 grandchildren and 14 great-grandchildren. He is survived by one sister, Littagale Barnes of Traverse City, MI. In addition to his wives, he was predeceased by his brother, Howard and sister, Mildred; as well as a son, Gregory and a daughter, Mildred Kelly; granddaughter, Leslie Guimond; and grandsons, Andrew Beckman and Brian Guimond. His entire family wishes to thank Meadow View Memory Care and the Green Community, and Homewatch Caregivers for their excellent and loving care over the years. A celebration of Arthur’s life will take place from 2-4pm, on Sunday, May 27, 2018 at the Montague Inn, 1581 South Washington Avenue, Saginaw, Michigan 48601. Memorials may be made to the Alzheimer’s Association – Greater Michigan Chapter at https://act.alz.org. Please note that your gift is in memory of Arthur Guimond. As he noted at the conclusion of his memoir, I REMEMBER, “I can look back on an interesting and challenging youth, some memorable naval experiences, a highly fulfilling and wonderful marriage, outstanding children and grandchildren, close and continuing friendships, a successful professional career, community and church involvement. If I had to live my life over, I’d do the same things again.” He will be sorely missed. For information, please contact Fischer Family Funeral Services at (989) 755-8277. For online condolences, please visit www.fischerfuneral.com.

The family of Arthur Thomas Guimond created this Life Tributes page to make it easy to share your memories.

Send flowers to the Guimond family.