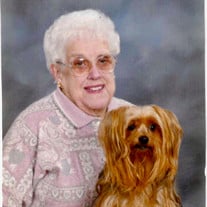 Alice Louise Rex, age 97, of Saginaw, passed away Friday, April 19, 2019, in Saginaw. The daughter of Edward and Irene Rex, Alice was born on February 17, 1922, in Saginaw. She lived in Saginaw all her life, growing up in her grandparents’ home on South Fourth. She attended Emerson School, Central Junior High School, and Saginaw High School, graduating in June of 1940. She went back to Saginaw High the following year to complete post-graduate courses in bookkeeping and business. In June 1941, during the war years, Alice started working at the NYA Camp. This was developed for young men and women to be trained for factory machine work. There were dorms, dining, and recreation buildings. After training was completed, they were able to get jobs in the factories. This program lasted two years until June 1943. In September 1943, Alice started working as an elementary school secretary at Emerson and Hoyt schools. After 29 years, Hoyt School closed and she transferred to Salina School. After 8 years, she transferred to Kempton, retiring in June 1986 after completing 43 years of service in Saginaw Schools. Since her work with the schools only lasted from September to June, Alice worked summers at the Lutheran Neighborhood House doing Bible Study, playground supervision, and day camp programs. In 1953, she began working summers as Director of Camp Missaukee, a girl’s camp in Lake City, Michigan, for 21 summers. Alice was involved in many church activities, serving as a substitute organist, children’s and adult’s choir director, and teaching Sunday School to children for many years. She attended Mt. Carmel Bible Camp for over 50 years. For 12 years during their summer and late fall programs, she served as the Prayer Intercessor Director. She enjoyed many activities and hobbies, such as quilting, knitting, volunteer work with the Saginaw Fair, Habitat for Humanity, Churches, and more. Alice loved working in her yard and growing beautiful flowers. Roses were one of her specialties and she won many ribbons at rose shows as a result. Alice always had a dog by her side, the last one a rescued Yorkie, Daisy Mae. Alice is survived by her dear friend, Richard Borm; her beloved dog, Daisy Mae, whom she has left to Richard; her church family, Saginaw Fair family, co-workers from Habitat for Humanity. She was preceded in death by her parents. Visitation will take place Wednesday, April 24, 2019, from 9:00 a.m. until the time of Funeral Service at 11:30 a.m., at Resurrection Lutheran Church, 2110 Brockway Road, Saginaw, MI 48602. Pastor Marilyn Robinson will officiate. Burial will take place at Forest Lawn Cemetery, Saginaw. Memorials in Alice’s name may be made to the Saginaw County Fair Grounds, care of Saginaw County Agricultural Association, Post Office Box 449, Chesaning, MI 48616. For information, please contact Fischer Family Funeral Services at (989) 755-8277. For online condolences, please visit www.fischerfuneral.com.

Alice Louise Rex, age 97, of Saginaw, passed away Friday, April 19, 2019, in Saginaw. The daughter of Edward and Irene Rex, Alice was born on February 17, 1922, in Saginaw. She lived in Saginaw all her life, growing up in her grandparents&#8217;... View Obituary & Service Information

The family of Alice Louise Rex created this Life Tributes page to make it easy to share your memories.

Send flowers to the Rex family.